Choir of Sidney Sussex College, Cambridge SIDNEY SUSSEX COLLEGE rose from the ruins of the Cambridge Greyfriars in 1596 and has long been a nest for professional musicians. Indeed the large chapel that stood on this site in pre-Reformation times was the regular venue for University ceremonies and was the venue where a number of early English composers took their degrees, including Robert Fayrfax (MusB, 1501; DMus 1504) and Christopher Tye (MusB, 1536). One of the earliest musicians in the College was the Royalist pamphleteer, author, and violist Roger L’Estrange (1616–1704), whose family were patrons of the composer John Jenkins. Earlier still, the great Elizabethan composer William Byrd would have been well-known to the foundress, Lady Frances Sidney, and indeed two very fine elegies by Byrd survive for her nephew, the poet and courtier Sir Philip Sidney. Currently resident in the College is Dr Christopher Page (1991), founder and former director of the multi-award-winning Gothic Voices, and Dr David Skinner (2006) who is director of the early music ensemble Alamire, and Sidney’s first Director of Music.

The Choir’s first recording with Obsidian was Thomas Tomkins ‘These Distracted Times’ with Fretwork and Alamire, which was awarded Editor’s Choice and CD of the Month in the Gramophone. Their most recent was music by Thomas Weelkes, also with Fretwork, which was nominated for a Gramophone Award in 2014.

The choir has since gone on to record and tour a number of innovative programmes, and frequently tours throughout Europe and the USA. The YouTube link http://www.youtube.com/watch?v=-HPzNE4mM7c– is of a live recording from Souvigny Music Festival, France, last September; the choir can also be found on Spotify. 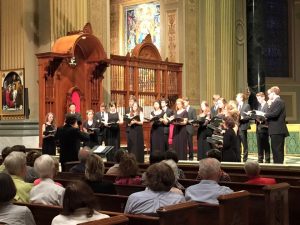 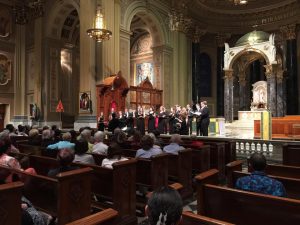 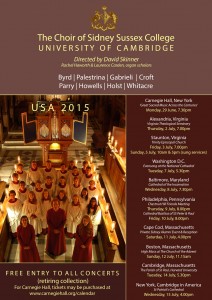 Cambridge in America is delighted to announce the Choir of Sidney Sussex College will be touring the East Coast of the USA from June 26th to July 16th 2015, following its tours of Austria and Rome. The Choir already has exciting dates confirmed at Carnegie Hall and the National Cathedral, in addition to events in Baltimore, Boston, and Northern Virginia (for the current program of confirmed dates, see below). The choir’s director, Dr David Skinner, is a noted musicologist and choral conductor (see www.alamire.co.uk) and specializes in repertoire of the 16th century but strives to maintain a balance from all musical periods, creating varied and interesting programs. The choir’s recent recordings have achieved significant critical acclaim, winning a BBC Music Award and more recently nominated and shortlisted for a Gramophone Award. The choir has a further album of Croft anthems due for release in Spring 2015. Recordings from the choir may be found on Spotify and YouTube; more background on the recent history of the choir may be found in the most recent edition of the Sidney Sussex College newsletter, Pheon.