Program — (To be selected from the following) 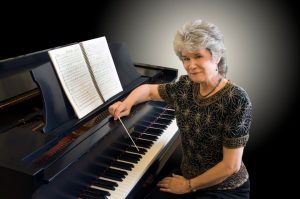 Peggy Dettwiler is Professor of Music and Director of Choral Activities at Mansfield University in Mansfield, Pennsylvania, where she conducts the Concert Choir, Festival Chorus, and Chamber Singers, and teaches choral conducting and methods.  Before coming to Mansfield, she was a graduate assistant conductor to Donald Neuen at the Eastman School of Music, where she received a Doctor of Musical Arts Degree in Conducting.  She also has a Master of Music Degree in Choral Conducting from the University of Texas at San Antonio and a Master of Music Degree in Music Education from the University of Wisconsin in Madison. In addition, she has studied orchestral conducting and appeared in concert in the Czech Republic and at the Oregon Bach Festival.  Dr. Dettwiler has chosen to seek degrees in these areas of music because she believes that the choral conductor must be an educator as well as a performer and must have a thorough knowledge of vocal pedagogy.

Dr. Dettwiler’s choral experience includes working with singers of all ages through university, public school, church, and community choruses.  Prior to coming to Mansfield in 1990, she was Director of Choral Activities at St. Mary’s University in San Antonio, Texas, and Choral Director at Mt. Horeb High School in Mt. Horeb, Wisconsin.  She has served as a guest conductor and lecturer throughout the United States, and she has given presentations at numerous ACDA and MENC Conventions. Her articles, “Developing Aural Skills through Choral Warm-ups” and “Grading the Choral Ensemble….No More Excuses,” were printed in the October 1989 and April 1995 issues of the Choral Journal published by the American Choral Directors Association (ACDA).  She has developed two pedagogical DVDs entitled, “Developing a Choral Color Palette” and “Sing in Style.”  Dr. Dettwiler received the 2010 Elaine Brown Award for Choral Excellence from the Pennsylvania Chapter of the American Choral Directors Association and was awarded 2nd place for the 2011 American Prize for Choral Conductors at the College/University level.

Dr. Dettwiler is past president of the Pennsylvania Chapter of the ACDA and is the Pennsylvania representative on the Board of Directors for the National Collegiate Choral Organization. The Mansfield University ACDA Student Chapter, which she advises, was recognized as the Outstanding Student Chapter in the nation in 1997 and 2001 by the American Choral Directors Association, and the Mansfield University Concert Choir has been invited each of the last twenty years to perform at state, regional, national, or international choral conventions.

Dr. Dettwiler grew up on a farm in the Midwest and spent considerable time raising and showing horses and ponies. She has now settled in rural Pennsylvania with her husband, Jürgen Thym, Professor of Musicology at the Eastman School of Music in Rochester, N.Y. They enjoy watching wildlife in their backyard along with their three cats, Gilbert, Gretel and Rossino.

The Mansfield University Concert Choir is a highly select ensemble of singers, representing some of the finest talent from the American Northeast. While the majority of the singers are undergraduate music majors, membership is open to all students at the university through an audition process.

The group has achieved an impressive reputation of excellence, having been chosen each of the last twenty years to perform at conventions or festivals around the world: the Pennsylvania Music Educators State Conference; the Eastern Division Music Educators National Conference; the Music Educators National Convention; the American Choral Directors Association Pennsylvania State Conference, the ACDA Eastern Division Convention, and for The Sound of Music in Carnegie Hall! They also performed at the Inaugural Conference of the National Collegiate Choral Organization in San Antonio, Texas, and for the third NCCO Conference at Yale University.

In 2008, the Concert Choir won the Championship in the Gospel & Spiritual Category and placed second among 36 choirs in the Mixed Youth Choir Category at the World Choir Games in Graz, Austria.

In 2011, the group won first place and two second-place prizes at the International Eisteddfod in Llangollen, Wales, and was awarded the 2011 American Prize in Choral Performance for the College & University Division. Most recently, the Concert Choir won three gold medals at the 2012 World Choir Games in Cincinnati, OH.

The singers are frequently praised for the emotional spectrum in their performances, their diverse vocal color, and their varied repertoire.